tofu again? the lost book of Tofu... The Apocrypha version revealed
That, on the left, is an astrological chart for when I posed the question, "should I start a tofu factory in Adelaide", South Australia? At the time, January 1981, I was living with a wife; we met at an astrological conference in Sydney in January 1980, 'hooked-up' in May 1980 in Baltimore Maryland, she went back to Adelaide and I went to Hawaii where I received the phone call a few weeks later that our 'hook-up' moment in Baltimore had a creative aspect to it and soon she was in Hawaii and soon we were married, with a new name, I changed from Adsit to Neuage for some odd reason and she changed from something Ukranian to Neuage, and a week after Sacha was born I had this idea to start a tofu factory in Adelaide, where I had never been. In June 1981 I started my business in Australia which lasted eight years. In June 2011 I am starting this e-book. 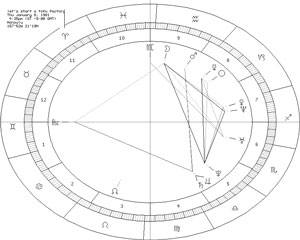 Astrology made me a bad tofu maker

I once thought astrology would provide a road-map to my life but the more I studied it the more I realized it was only a road-map in as far as one made it up as they went. Astrology is a system that can be made to say whatever we want to hear. It is not just Sun sign astrology – take the other planets, add a few asteroids and fixed stars and nodes of planets and midpoints between planets and houses and house rulers and a few hundred other celestial objects and someone will find something that will explain something. I love astrology, and have spent many hours looking at my chart and my chart in relationship to another person's chart and if I progress using anyone of several systems then surely I can explain why it is the way it is. However, for as many times as I have found an astrological explanation for something that happened there have been momentous moments in my life that have no direct astrological signatures to explain them. Like my rise to failure of tofu making 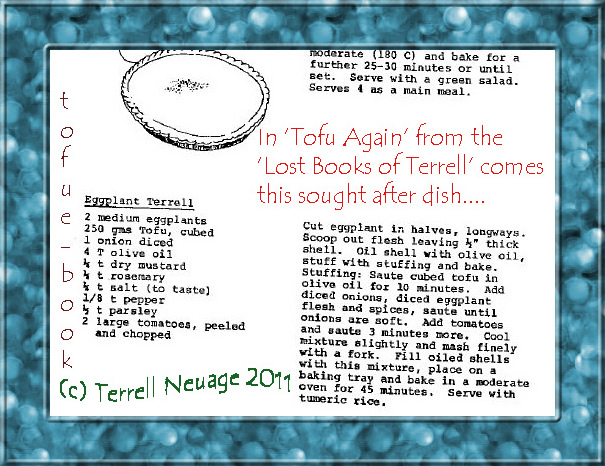 Between the curds & the whey

Lightfoods
Light Foods for several reasons: • Adelaide was chosen as the capital of South Australia and designed by Colonel William Light (1786 - 1839) in 1836, • We hoped our products would appeal to those on diets and wanted a light food (low-calorie and reduced-fat foods), • Still having a smidgen of spirituality left in me still I liked the line 'For my yoke is easy, and my burden is light'. 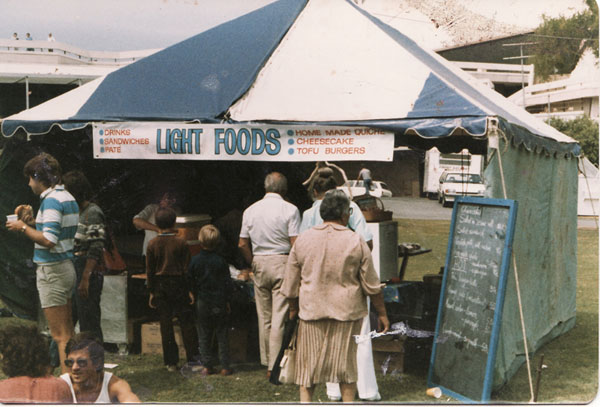 of course in the e-book there are not only receipes but many more stories...

I moved fully out of the Meadows Cheese Factory because of not having my truck and
into my farm to make all my products. Other than a couple of more great ideas that came
to naught and cows who ate my tofu-burger-mix life was not too bad until one fine day
when a health inspector popped in and disapproved of my whole set-up. Something about
rats and cows and flies and cats and my dog and the openness of my lawless wall-less
factory. Fortunately, I found another ex-cheese factory not far away in the town of
Myponga, which was twenty minutes from the farm. The name, Myponga, derived from
the Aboriginal word maippunga meaning locality of high cliffs. In retrospect I saw I
should have stayed at the cheese factory in Meadows or any one of things 'I should have
done' in life but the Meadows factory had been rented for a car repair. Currently it is the
Meadows Cheese Factory Theatre and studio gallery which is located in the huge cool
room that was once my tofu factory. Sometime in 1987 I moved my production out of the
farm and to Myponga. Myponga is another beautiful South Australian area. If I had those
kinds of thoughts I would think the troubles I had for the next decade were due to the
uranium in the ground. Uranium was discovered in the early 1950s; however, there has
not been any attempt to dig it out as of yet. I thought it would be useful in our
advertisement something about the tofu that makes you glow but in light of my health
food hippie market decided against it. Maybe it is what inspired one of my more favourite
poems later on; "Because you glow in the dark I know your love for me is
real".
Myponga consists of three commercial establishments, the Service Station, General Store
and the Myponga Take Away as well as the Methodist Church and Hall, built between
the years of 1866 and 1883. The huge dairy factory, which at the time I moved in divided
into several sections. The area behind where I made tofu was home to a large mushroom
farm. Another section was used to make crepes that were delivered to restaurants around
Adelaide. I had two large areas in the front of the building. In one area I had my tofu
production and in the other, which once was once the store for the dairy company
formally housed there, I had a small soy deli. I had very few customers, as I was the only
one selling directly to the public from the cheese factory. In the late 1990s the old Cheese
Factory complex was called the Myponga Country Markets and it operateed on weekends
selling everything from farm produce to handcrafted stuff and bric-a-brac. In the late
1990s I even had a box of my picture-poems sitting in one of the shops in the market.
The drive between our farm and the factory in Myponga was a wooded winding country
road with the factory representing another out of place stop in my life; though the last
stop in this particular relentlessly unhappy drive toward my untimely failed attempted
dominance of the world's tofu market. The factory, badly in need of paint and repair sits
in front of the Myponga Reservoir. The reservoir, whose water supplies the south of the
City of Adelaide is surrounded by dense pine forest and even in the midst of my pending
doom and current gloom it cheered me momentarily. Five years after acting out this sad
part of my life I would drive over the Myponga Reservoir wall (a concrete arch dam with
a ski-jump spillway) in a large mobile home with my children and my 87-year-old father.
We even stopped on the narrow road and looked over the side which was at least a
fifteen-story drop on one side to the valley below and on the other side the water splashed
peacefully on the side of the dam. I now know what a fifteen-story height looks like, but
at the time it seemed a long ways to the bottom. Now I realize it is only a few seconds
distance. A distance that can take one from one world to another world in seconds. A
distance that would be meaningful to me later on in my life. Maybe that is what life is;
we are on a narrow road with peaceful gentle water on one side that we do not
know or fear the depth of and on the other side is a sheer drop to a rock filled
peaceful valley below. Life and death on either side of the wall and we are
always just barely balancing between the two.
When we were not going back and forth to our Mount Compass farm we would drive out
of Myponga to Victor Harbor and the Encounter Coast through Yankalilla. I had tofu
customers in Adelaide and the Adelaide Hills and as far away as Brisbane and Sydney
and Melbourne but I did not deliver to any shops in the towns that we lived in or so often
went through.